Like the former volunteers Mark and Johanna two years ago, we - Tom and Lina - also organized Christmas celebrations at Divine Mission Junior School. To celebrate Christmas in school, we wanted to offer the children a Christmas Dinner, especially for those who could not afford a proper dinner for Christmas at home. As the school holidays had already begun, it was nice to have the children back in school.

We expected to have 150 children attending the celebrations for which we had to provide food for. Some of the food like onions and potatoes were brought by a teacher who spent the holidays in his home town Kabale. Tom’s parents, who visited Uganda over Christmas, and the Divine Mission School supported by donators, provided everything else.

The day prior to the celebrations we bought the food that was deliciously prepared by local cooks the next morning.

The celebrations started at 12:30 pm with a prayer by Mr. Musisi, the head of the school. As the children knew that Mr. Musisi likes to talk a lot, only around 20 children showed up in the beginning. We were worried that no more students would show up, but David assured us that they would. After the prayer was over, the food was served, and the music started to play, suddenly about 200 people appeared forming a nice and merry crowd.

Tom introduced his parents and the children had the opportunity to ask questions about Germany. Although, they were more curious about whether or not they would get sodas later in the day. Fortunately, sodas were supposed to be provided later so that the children were looking forward to that.

After dinner, the music was turned up, and people started to dance. We also organized dance competitions in which the children showed their skills. The crowd decided the winner by cheering who is getting to the next round. 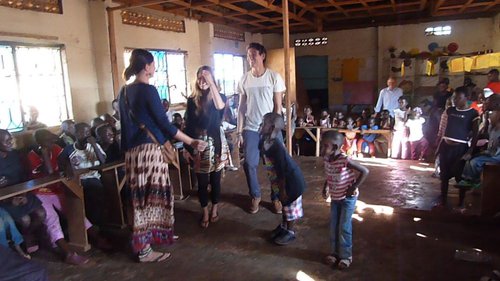 In the end, everyone had delicious cake, and the competition winners received two pieces. At 6 pm, the party ended, and we sent everyone home so that they would arrive home before dark.