After the successful first exchange trip between the Tanzanian orphanage "Watoto wetu Tanzania" and the Ugandan school "Divine Mission Junior School" in Dar es Salaam in 2012, it was no question that the cooperation had to be continued. From 6/30/13 to 7/7/13 the second exchange took place - this time students from Tanzania visited Kampala. 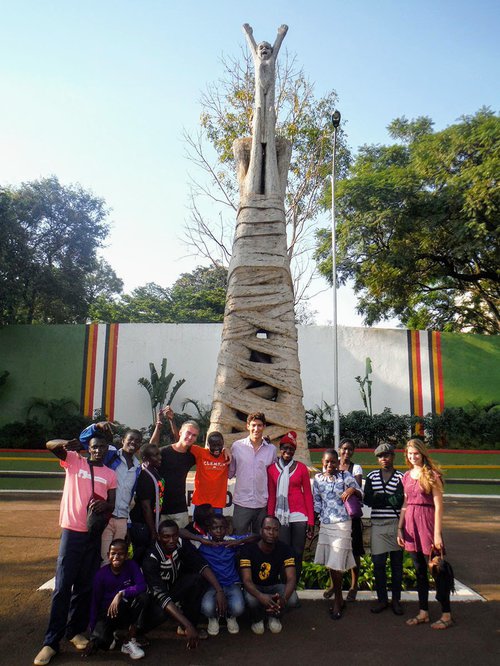 Six secondary students arrived from Dar es Salaam with Markus, a volunteer, and their teacher, Chris, in Kampala. After a tough 36-hour bus ride and successfully crossing the border, they finally arrived at the Divine Mission Junior School. The principal Dr. Musisi had prepared a welcome speech, and the school choir performed a few songs. Due to the tough bus ride and the small amount of sleep, everyone was very tired. So everyone went to sleep after dinner to be well rested for the official program that started the next morning.

With various games, the Ugandan and Tanzanian children had the opportunity to get to know each other. Furthermore, the teachers, John and Chris, had prepared some general information on the subject of democracy, and the Ugandans and Tanzanians exchanged their understandings about their country, history, and current political situations. At the end of the day, the group went to the national theater to enjoy a jam session by local artists.

Tuesday's schedule included a trip to downtown Kampala and a visit of the "Ugandan Museum" with an exhibition of Uganda's history from pre-colonialism until today. After lunch in a nice restaurant overlooking the "Old Taxi Park,” we took a guided tour through the studios of UBC, one of the big national TV and radio stations, which was really interesting. Furthermore, we visited the parliament and the statue of liberty. For Wednesday we had prepared a workshop. In the morning, we talked about HIV/AIDS. The children were taught about the topic in general before they talked in groups about the situation in Uganda and Tanzania. In the end, they had the opportunity to ask anonymous questions. After the lunch break, we dealt with the topic: freedom of the press and media. This is actually a current topic in Uganda because the government recently closed a newspaper. We used caricatures to present and discuss the outcome of the work on that topic.

We had planned another field trip for Thursday. We went to the zoo in Entebbe. Probably for the first time in their lives, the children saw their own country's wild animals. We spent almost the whole day in the zoo. After dinner, we went to a "Movie Night" to see Avatar.

Friday started with some sport activities. We drove to the Makarere University to go swimming, which meant that some children had to learn to swim. It was a lot of fun for all of us. In the afternoon, we did another workshop. The topic: Genocide in Ruanda and the question of how culprits and victims can live together today. After that, the week was almost over, so we spent the Friday evening drinking soda, talking, listening to music and dancing. For Saturday, we had prepared one last workshop, which dealt with the topic corruption. Caricatures, statistics and tables were used to make the children aware of the big problems regarding corruption. A soccer tournament was planned for the afternoon, which was the highlight of the week for the boys. We had four teams: the team of the Divine Mission Junior School, the Exchange team, the volunteers, and the guys from "Boys Home," another project. The teams played against each other. But the other teams had no chance against the Exchange team. Everyone enjoyed this very nice, last evening. After we had breakfast together and after a few last words, the Tanzanians started their journey back home. All in all, it was a nice, eventful, and entertaining week for everyone. On the one hand the children became friends and learned a lot about each other, as well as in the workshops. The workshops were created not just to learn facts by heart, but also to make the children think about the problems most of them are faced with every day. More importantly, the children learned a lot about their neighboring country, and that in times of globalization, the English language is becoming more and more important in Africa (primarily in the African Union) if you leave your own country. The week was a great opportunity to practice their English skills, not only to get good grades in school or to ask tourists, "How are you," but also to be able to talk to their neighbors and solve problems, as well as to overcome differences and show common ground.

We want to thank everyone who made this exchange project possible. We enjoyed it a lot!